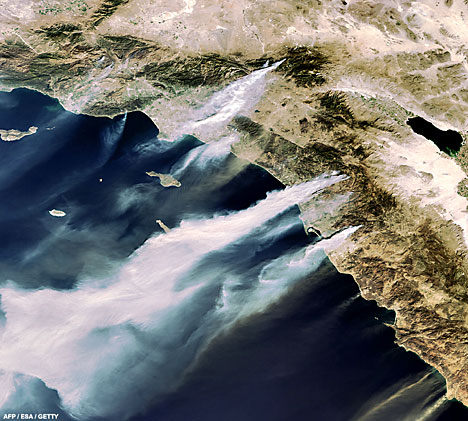 David was on Coast last night describing the wildfires that burned near his home.

We just wanted to give a quick update. David is in a hotel, his home is safe, and he expects to return home soon. We thank you for all your kind letters of concern.

As you can see in this recent satellite photo, there is only one small puff of smoke remaining in the general vicinity of David’s home at this time — the second fire down from the top left area of the coast:

This location is southwest of the area where David’s home is, and the Santa Ana winds are blowing away from the house, so we don’t expect any further problems.

This was not how the ‘vacation’ with David’s father was planned to go, but you move with the flow of life and take steps as needed!

Our sincerest thanks and gratitude go out to the thousands of brave and valorous firefighters who are battling this blaze and risking their lives to help others.

David here. Some of you asked when I was on Coast. It happened during the end of the second hour of Monday, October 22nd’s show.

I was holed up in the Holiday Inn with my father as an evacuee when I saw a concerned email from Richard Hoagland. I called him to let him know I was OK. He sent George a quick message telling him my situation, and within 15 minutes I was on the air, doing a little five-minute segment about what I had witnessed.

Thankfully the fire line never got close to where I live — but I did capture a bit of video on my camera of the firetrucks on the hill and the yellow-orange menace as it slowly made its way.

I dropped Dad off at the airport Wednesday morning and took my car in for smog testing. I ended up failing the test, and am now staying with a friend in Santa Monica while 1000 dollars of repairs are being done. I have a positive attitude about it because I don’t want my car to pollute the atmosphere, and had no idea there was a problem — but it does represent an inconvenience, as anything of this nature would.

As of tomorrow (Friday) the repairs should be finished and I will be back home, safe and sound. I haven’t been able to work on Part Two of the DNA piece yet, but that should be forthcoming next week.