The End of Our Century

The End of Our Century 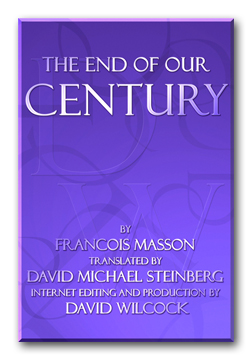 According to Prophecies, Cyclic Projections and Other Means of Knowing the Future

We include this book on our website primarily for the chapter on “cyclology”, as Masson’s research here is unparalleled by any other we have seen. If you don’t read anything else, DEFINITELY read that! It will blow you away. Masson shows a very clear, scientific rationale for the idea that major events in history can – and do – repeat in quite similar fashion in set intervals of time. Masson makes an extremely compelling case for a 2,160-year cycle – exactly one Age of the Zodiac – in which events in Roman history are playing out in almost exactly the same way in 20th century American history! It is true, though, that Masson’s book also falls into the historic category of literature that thought “the year 2000 is it!” So in that sense it seems dated – but on the other hand, his scholarship is tight enough that you have to wonder if we did, in fact, change the future by growing in ways that had not been previously anticipated. Also note that his Roman / American cycle research did NOT focus on 2000 – this date was from his attempts to bring in other sources like Nostradamus. What follows is the original introduction text: Masson has not taken isolated psychics, seers, clairvoyants and prophets and made a catalogue of predictions “you or I could give as much credence to our own dreams. He has restricted his study to sources of proven and accepted validity, and to predictions in which at least three disparate sources concur on a particular date or event. Even with this limitation, there is a tremendous body of evidence to sift through, and Masson’s conclusions include specific, concrete predictions of political, military, religious, psychological, geological “and interplanetary” events.

When there is the same interest or study given to things or phases of mental and spiritual phenomena as has been and is given to the materialized or material phenomena, then it will become just as practical, as measurable, as meter-able as any other phase of human experience This very unusual prophecy is already beginning to be fulÂ­filled and parapsychology is now studied in universities and by dignified governments. The sociological study of the effect of the sunspots on the behavior of human groups, this profound research on historical cycles leading to the startling results obtained by Michel Helmer, prove the reality of predicting the future, at least in its major large-scale trends. These new techniques confirm in detail the visions of undisputed seers like Nostradamus and Edgar Cayce as well as the words reportedly associated with apparitions of the Virgin Mary. The present work is an attempt at synthesis of these various elements and the reader can note the striking agreement of these elements which emphasize the years 1979-80, 1990-91 and especially 1998-99, at which time the first mutation of humanity as it enters the age of Aquarius will be complete. [Note: As illustrated in The Shift of the Ages, in retrospect it appears that the true event referred to in the prophecies coincides more neatly with the end of the Mayan Calendar cycle, circa 2012, than with the turning of the century. This does not affect the contents of the book very significantly, other than Chapter Two. The information here is priceless. (DW)]