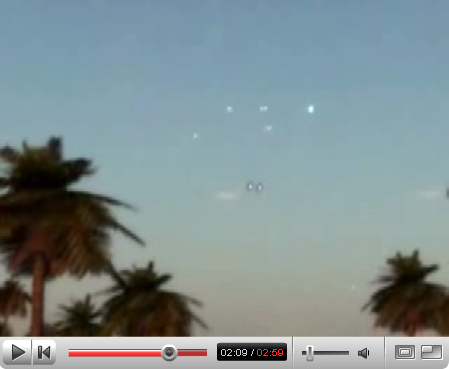 This video is one of the most astonishing UFO videos we’ve ever seen — and if it is a hoax, they did an absolutely fantastic job!

Watch for yourself… and join in the discussion group to air your thoughts!

If this is a fake it’s very good. Notice how the focus of the craft moves in and out of focus with the camera, and how the shakiness of the camera is perfectly matched between the UFOs and the surrounding trees.

Also, the wobble in the ships’ movement is not a sign of ‘wires’ — it is a standard feature of anti-gravity propulsion, as seen in many other videos.

A similar wobble can be seen in the 1997 Mexico City footage. This UFO was not only filmed, but witnessed by many thousands of people from all different vantage points throughout the city:

In this next angle of the same sighting, you get a close-up of the ship as well:

We must never let our desire for such high-quality GENUINE footage blur our discernment. The problem is that whomever filmed this was apparently using a CG program with a stock ‘object’ for a palm tree, and didn’t even bother to take the time to vary these objects or rotate them in different directions from the camera angle. Most likely the entire video is a computer-generated environment.

The ‘smoking gun’ can be seen in this frame-grab below. Look at the tops of the trees in the frame. All four of them are just about identical — and this is precisely what would happen if he were cloning the same object and pasting it in multiple locations within the landscape:

Given the extremely high quality with which this video replicates the shakiness, focus pulls and overall ‘organic’ feeling of a home video — not to mention the quality of the water tower at the beginning and the city in the background at the end — the bigger question now is whether this is just a home-made project or a clever ‘inside job’ for some other purpose.

For example, one possibility is that it could be a test to gauge the public sentiment about UFOs, with enough of an obvious problem that it can then be discredited for plausible deniability.

I’ve gotten several emails from people who stubbornly refuse to accept this video is a hoax despite the overwhelming evidence of the near-identical palm trees. Over a recent dinner with a Hollywood CG artist friend of mine, he gave me a detailed 15-minute technical dissertation on why and how he immediately knew the entire video was CG generated.

Now the proof has come out in the form of an LA Times interview with the CG artist who created it – a French artist named Barzolff.

Considering that we now have a quote from the producer of “Eternal Sunshine of the Spotless Mind” that this was a hoax, and Barzolff created a new video for the LA Times that presented the exact same UFO in a comedy context, as if it were a remote-controlled toy, this is officially CASE CLOSED:

Does this spell the end of any UFO video to ever be verifiable again? No. As in the case of the Mexico City sighting, all you need is multiple eyewitnesses and more than one camera capturing the same thing. Single stand-alone videos, however, without alternate witness testimony for documentation, are officially dead.

The other positive aspect of this whole debacle is it has proven how ready people are for the truth when they DO get the truth. And more and more, as we move though these energetic changes we’ve so often written about here at Divine Cosmos, you will be seeing that truth — up close and personal.