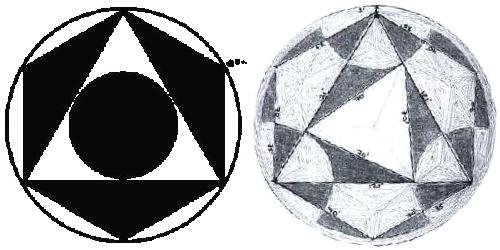 The above image, gleaned from recent “Crop Circle ” formations in England, is probably the single most invigorating and satisfying shot that we have ever had the pleasure to post, as it leaves little doubt of the content of its message.

It is not difficult for even the novice to see, when laid side-by-side like this, that the formations are thematic. These formations come as the latest, most definitive statement from Higher Intelligence that the hyper-dimensional geometry model that we have espoused on this site is indeed accurate.

And once we accept the undeniable and extensive scientific proof, then we realize that what we are seeing here is a concrete, sequential set of hyperdimensional physics diagrams.

Our existing research shows that diagrams like this are graphically illustrating that a completely unprecedented spiritual event in our planet‘s history is about to occur – the Shift of the Ages, the transformation of the underlying octahedron-based energy vibration of this planet and its inhabitants into a higher dimension, based in the tetrahedron.

The theme, first established on the left, begins with an octahedron, (see below image,) one of the five basic Platonic solids, with a circle that represents a sphere perfectly positioned in its center.

Then, the theme continues in the diagram from one week later as we see the octahedron undergoing a rotating, geometric expansion into a higher-order formation, which when finished (as it is not in the June 18 diagram) will appear to be an interlaced or “star” tetrahedron, representing the fourth dimension.

Circles of an identical size as in the center of the June 11 diagram now are centered at the three visible corners of the main triangle in the octahedral shape from June 18. (Furthermore, the small central triangle in the June 18 diagram can also be seen as one face of a smaller octahedron that is clearly undergoing curvature of its other faces.)

In the below image we can clearly see how the addition of a tetrahedron to each face of the octahedron will complete this rotating transformational process into a new shape.

Only one of the eight tetrahedra is shown being fitted into position in the second diagram from the left, but the third diagram shows what the shape will look like when all eight tetrahedra have been added. Such a tetrahedron can be clearly seen in the center of the June 18 formation to the above right. 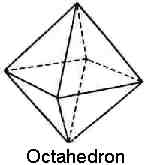 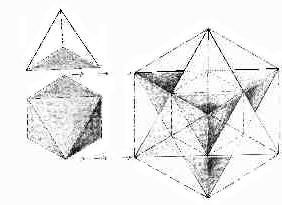 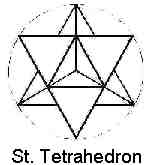 SO WHAT DOES THIS HAVE TO DO WITH PHYSICS?

In this new model of physics that the Visitors have led us to understand in a variety of ways, each dimension is a resonating frequency of one unified energy source.

That unified energy source has been properly discovered by modern science and is termed “zero-point energy” (ZPE), “aether” or the “energy of the vacuum,” as we have written in Convergence III. As we recently stated on the Laura Lee Show, the key aspect of this system that most of the frontier ZPE researchers have missed is that it behaves like a vibrating fluid that naturally assumes different frequencies.

These frequencies can be represented and “seen” as an octave of colors, tones or geometries, and physicists Buckminster Fuller and Hans Jenny graphically described how simple sound vibrations in fluid do indeed form these basic shapes. 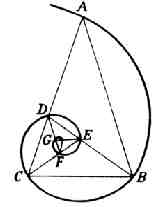 These curving/spiraling lines vibrate in a predetermined, structural fashion that we refer to as “fractal,” specifically the Julia Set. The June 11 diagram above shows just the beginning of a Julia Set fractal line curving out from the top right corner of the octahedral shape.

And in the below image, Hans Jenny was able to accurately model this masculine-feminine interplay in a fluid, vibrating at a simple, pure sound frequency. It is easy to see the star tetrahedron in the center.

It is important to note that we obviously do not yet have the precision of instrumentation with vibrating fluids to see how the feminine lines conform to the standard fractal “chaos attractors ” that the crop formations have illustrated for us.

However, there have been scores of Julia Set-style formations that illustrate the spiraling, fractal, feminine component to this system of physics over the years.

The diagram to the right is an enhancement of the Windmill Hill 1996 formation, adding straight lines and an outer sphere in order to make the point of what we are being shown – the expanding, fractal, spiraling lines that form the structure of the tetrahedron. 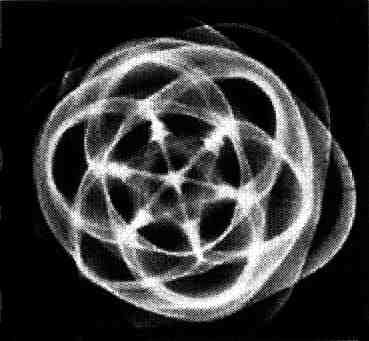 As we have said in other writings, the Hindu faith gives what we believe to be an accurate representation of how this Octave of three-dimensional geometry fits together. It is important to remember that geometry gives us a means of visualizing the dimensions that is far more concrete and useful in many ways than the colors or sounds.

The reason for this is that geometry is a shape, and these shapes actively affect the structure of physical space and the passage of physical time. At this point of June 2000, Convergence II has far more information about the specifics of how these geometries have affected the physical structure of the landmasses on Planet Earth, whereas Convergence III deals more with larger-order geometric structures in space and time.

This is obviously not the first time that the Circlemakers have given us the concept of a Platonic Solid with a sphere on the inside or outside, detailed in a crop formation. In the first chapter of Convergence III, we have pictures of a formation from 1999 that illustrated the exact same idea, only the sphere was perfectly positioned inside of a cube.

We also showed this formation next to Barbury Castle 1991, which showed a sphere inside of a tetrahedron. In 1999 we also saw a formation that showed an octahedron being “unwrapped, ” with an indication that it could expand – though not as clearly obvious as what we have seen this year. So, clearly we are seeing the continuation of a theme.

Another June 2000 formation gives even more detail on the fact that the octahedron is meant to be seen in a sphere. This tiny image from the Crop Circle Connector website gives a clear view of what the formation looks like.

Then, by simply paying attention to the diagonal lines that can be seen between the corners of the square, a clear-cut image of the top of an octahedron emerges, just as if you were looking down on the Great Pyramid of Giza from directly overhead.

This formation is obviously making quite sure that we do not miss the “point ” of all this: namely, three-dimensional geometry.

Our intent is not to rewrite all of our work in this brief article update, and some of this copy may well show up in much the same form in Convergence III later on. For now, we can sit back and marvel as the forces of Higher Intelligence shine a not-too-dim spotlight on the work that we are doing here, accenting its validity and importance.

We are constantly finding more and more information that supports our hypotheses at speeds almost faster than we can process and compose into words, but this formation obviously needed immediate attention!

The point, as always, is for us to understand that we are on the threshold of an almost indescribable event- a complete restructuring of all physical reality as we now know it to be, a spiritual transformation that can only be comprehended in the realm of the imagination at the moment.

The many deep-trance writings on this website are all given by the Visitors to us to help us understand on an emotional and spiritual level how we may best prepare for these unstoppable changes that will continue to occur all around us with greater and greater intensity.

Good luck to you in the quest for greater and greater self-knowledge, forgiveness and acceptance, and Peace be with you!