The first film in the CONVERGENCE trilogy will address the science of consciousness.

This film will cost remarkably little to produce, but has such a powerful, clear and urgent message for humanity that it is poised to be a box-office blockbuster, as well as a social phenomenon and agent of positive change.

An array of credible, professional scientists and scholars will present definitive evidence that consciousness is a field of energy, independent of one’s own mind and brain. Common knowledge and implementation of this science has the potential to dramatically increase world peace and harmony, and dramatically decrease catastrophic Earth Changes — and CONVERGENCE will give compelling scientific evidence to back up these claims, as well as the philosophical and spiritual understandings to go along with them. 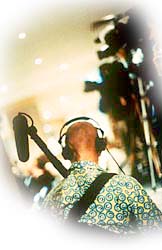 The CONVERGENCE trilogy is the result of David Wilcock’s work in categorizing, analyzing and distilling over 213 volumes worth of research he uncovered and printed off the Internet between 1999 and 2005, occupying over nine and a half feet of width on his bookshelves. This research has been guided by David’s intuitive work, which includes daily documentation and analysis of his dreams and visionary experiences since 1992, and active research and development of extrasensory abilities since he was 7 years old.

Leading scholars in new science, such as popular Art Bell guest Richard C. Hoagland, have publicly stated that David’s research is unparalleled and completely new and fresh. By comparison, most of the information presented in “What the Bleep Do We Know?”, the astonishingly successful film documentary that came out of nowhere to create this brand-new genre, is an offshoot of the groundbreaking 1979 volume “The Dancing Wu-Li Masters” by Gary Zukav.

David has carefully chosen each participant in CONVERGENCE for his or her professional credentials, validity and fastidiousness of research, and impeccability of moral and ethical character.